Is it end of the road for community-based banking?

Nagamma has been a flower vendor for more than 20 years in my neighbourhood in Bangalore. She has joined several informal `chits’ at various times to save some money and generate loans. But many a time the persons running the `chit’ have fled with the collections.

As a finance professor, I thought, I should do some practical finance and advised her to open an account with a commercial bank for saving her hard earned money and perhaps use that to get a loan some time later. The branch manager, a pleasant woman, has known the flower vendor for many years. But alas not the Core Banking Solutions (CBS) with its central server located in Davos or Basel. It will just not recognise Nagamma. The branch manager quite helplessly pointed out that the system decided about accepting new customers under the `Know Your Customer’ (KYC) model.

So it is not enough that the manager knows the customer. The `system’ should also recognise her using the Multi-Factor Discriminant Model of Non-linear Credit Rating. Nagamma was asked photos, proof of address, PAN number, proof of date of birth, references and also given exotic choices of using debit card and net based banking. It is sad that banks have moved away from the community-based recognition of new customers and particularly the small entrepreneurial class. Someone suggested no-frills banking for which forms are being organised to generate more thrills. 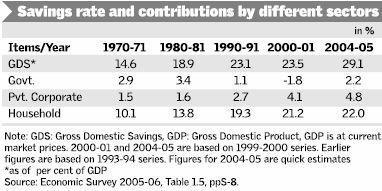 The phenomenal growth rate witnessed in the last few decades has been facilitated by the significant rise in the savings rate and much of this is by the household sector. Table 1 provides the share of savings by households (it includes proprietorship and partnership firms), the government and the private corporate sector. We find that more than 80 per cent of the saving comes from the household sector and if we look at the composition, at least one-third is held in the form of bank deposits.

We know that the service sector has been the engine of our economic growth. Four sectors — trade, transport (other than Railways), construction, and hotels and restaurant — constitute dominant portions of the service sector other than business and professional services. Actually, trade constitutes the third largest chunk of the economy (with a share of around 14 per cent after agriculture — 26 per cent; and manufacturing — 16 per cent). This trade is conducted mainly by Proprietorship and Partnership (P&P) type of organisations (non-corporates) with active involvement of members of family and community.

The share of the household sector in outstanding bank credit has come down to 47 per cent from 58 per cent between 1990 and 2004 during which period the household sector’s presence in trade, transport, construction, restaurants, and other business services has been growing at more that 8 per cent CAGR (compounded annual growth rate). Here, households include agricultural households and to that extent the fall is very significant. Hence, the growth rate of the economy in the 1990s is neither related to economic reforms of the Central government nor to the credit mechanisms of the banking sector. It is not only lazy banking but also banking with significant structural distortions. The share of the private corporate sector in the National Income is 12-15 per cent but it takes away nearly 40 per cent of the credit provided by the banking sector. The fastest growing non-corporate sector gets lesser share of bank credit, which reveals that the non-banking financial sector is playing an increasingly important role in the credit delivery mechanisms of the growth of the economy.

Of course, Finance Ministers often meet the bankers and “impress upon” them the need to enhance credit to the “unorganised” sector. There is an implicit belief among planners that the banks will meet what is called “Social Obligation” through directed lending if only more seminars are held.

There is something really problematic with the banking sector particularly in providing credit to sections that not only require them most, but also are the fastest growing.

On the other hand, the banking sector has increased its lending against shares, and to real-estate and commodities, called “sensitive” sectors, from around Rs 24,000 crore as at the end of March 2003 to Rs 59,000 crore in 2005; a rise of 144 per cent in two years (Source: ibid). Private sector banks have a much larger exposure to the share market and public sector banks to real-estate. The word “sensitive” might have been understood as critical and the words “socially relevant” are not any more relevant perhaps. The hapless Nagammas, who are the entrepreneurial class of this country, are classified “unorganised” or “residual” and left to the vagaries of unregulated, open market borrowing and lending. Due to the absurd regulatory framework, organised entities in `chits’ and other non-banking activities are leaving the field making it more difficult for the Nagammas of our country to access credit.

The local community based banking need not be given a complete go by. Software solutions can complement, and not replace, human decisions. The spirit of entrepreneurship, which is the basis of our growth, need not be snuffed out by half-baked policies and distorted priorities formulated by the metropolitan elite who have more knowledge of Wall Street than our own Ranganathan Streets, Brigade Roads, or Ajmal Khan Roads.

← FDI may be harmful to economic growth
Are we killing the self-employed? →