Is West ready to open the labour market?

Business-houses in India should form global corporations that provide on-shore human resources at a price. 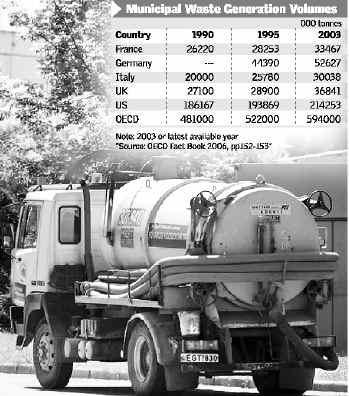 When the regulators in India impose restrictions on foreign holdings in the insurance or banking sectors, it is sometimes suggested that the country is not fully geared to a globalised world. In other words the level of globalisation is measured by the incremental dollar or euro flow into the domestic market.

But restrictions imposed on the entry of Mexicans to work in the carpet industry in Georgia, the US, or on that of Somalians to clean the dishes in restaurants in Paris are considered normal sovereign behaviour and not anti-globalisation.

Throughout the 1970s and the 1980s it was globalisation of the product markets and manufacturing facilities. The anecdotal lessons often repeated in many business school classrooms go something like this: The doors of the Ford car are made in Barcelona, the seat near Budapest, the gearbox in the suburbs of Paris and the music system in Osaka, while the assembly is done in Kuala Lumpur and the car is sold in Shanghai. So, what is American about it?

It is true that geographical boundaries are fast crumbling. Think global and act local, we were told, and the term “glocal” came into existence. This was the ultimate in the process of global integration of economic activities through integration of manufacturing facilities to reduce cost, take advantage of specialised skills and pool the resources available in the global market.

Then, the 1990s saw the globalisation of the financial markets. If you wanted to set up a facility in Shanghai, you could think of raising funds from the New York Stock Exchange if the project was sound and attractive enough to foreign investors. Funds were looking for markets, and “geographical diversification” became the buzzword. The correlations between stock indices of New York and Timbuktu were constructed to justify that low correlated Timbuktu offers a good portfolio possibility along with New York since low or ideally negative correlation implies risk reduction.

Pension funds were one of the largest investors, running into nearly $15 trillion, at least 15-20 per cent of this in the non-domestic markets. Funds started searching for markets instead of markets trying to attract funds. Life expectancy in Europe and the US increased significantly, and pension funds had to earn for longer periods. But the third and the most important dimension of globalisation is liberating the labour markets from the clutches of Western sovereign regulations and encouraging the free flow of manpower to carry out what may be termed `brown collar’ work in the West.

There is a spectre haunting the West. It is one of uncleared garbage, clogged drains and overflowing sewage. The Western world is facing an acute crisis in the area of brown collar labour. Labour to clear the garbage, take away the plates in restaurants, clean sewerage and treat municipal and industrial wastes.

All this cannot be outsourced as easily as white collar work as brown collar work still requires human beings at locations. In the 1950s and the 1960s, millions of the Turks and Kurds and Iraqis went to work in Germany when that economy was booming, and they were called gastarbeiters, or guest workers. Even today many of them have still not been given the rights of citizens.

Similarly, many Algerians and Moroccans went to France to find jobs. They continue to be a significant minority in France. Many of them are still guest workers since the French have this interesting idea of blood being important for becoming citizens — “original” French blood, that is.

The US possibly has one of the largest populations of brown-collar workers from another country, with more than a million Mexicans employed in the `land of opportunity’. These Mexican workers are called “undocumented” — a euphemism for “illegal”.

All these categories of workers in France, Germany, the US, and so on, are mainly in the blue/brown-collar jobs, and engaged chiefly in the low-skill work categories, such as cleaning rest-rooms and restaurants, meat-cutting, grape-picking, domestic help, road-laying, garbage-processing, plumbing, and so on.

With the economic slump of the 1990s, however, these European countries have erected fences and now reject visas for Third World labour.

Between England and France there is a huge camp (Sangatte camp), near the starting point of the Chunnel train on the French side and the main objective of thousands of migrants held there is to attempt to get into England, by some means or the other.

The requirements are soaring in the brown-collar area, as seen from the Table. Municipal waste has significantly increased and the per capita waste generation intensity for OECD countries is around 570 kg per annum, which has increased many times over, vis-à-vis their population. This, coupled with industrial waste, poses a huge challenge to the Western nations as the Caucasians generally have a disdain for brown-collar work.

The declining birth rate adds to this crisis. The population of Europe, which was 25 per cent of the world population at the beginning of last century, is expected to be around 10 per cent in another 10 years. A substantial number of people will be over 60 years old.

This is mainly because of low fertility rates in much of the West and enhanced longevity due to improved health-care. Hence, the demand for brown-collar labour will be significantly higher and the important point is that it cannot be outsourced as of now.

Currently we find labour from many Asian/African and South American countries risking their lives, travelling by boats and in containers, to reach the Western countries to take up work. Unfortunately, despite this being a crucial issue, it has not been discussed in in international forums, nor is it a main item in the Doha Round of the WTO.

Business-houses in India should form global corporations, which will provide on-shore human resource at a price. This will provide enormous opportunities for our brown-collar workers.

It is imperative for emerging nations like India to demand the opening up of the brown-collar labour market by providing unrestricted access to labourers. If financial markets want a borderless world, it should be the same for the labour markets.

It is a known fact that one needs to be careful in the international arena by playing the game as per rules set by others.

But the time has come for countries like India to play a completely different game since the current WTO negotiations, as colourfully articulated by our Commerce Minister, Mr Kamal Nath, are between the ICU and the mortuary.

← India should strengthen its database
NGOs should practise what they preach →