Remittances versus FDI/FII Hats off to the emigrant worker

It is imperative that the country recognises the important role played by its workers, blue- and white-collared, on foreign shores in providing a phenomenal amount of foreign exchange that is stable and not volatile like portfolio and direct investments, says R. VAIDYANATHAN. 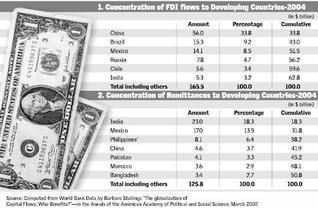 The size of Foreign Direct Investment flows has become a measure of the performance of the economy. Many an expert believes that FDI flows are the life-blood of the economy. Thus, it is suggested that we do not even sneeze else international funds will catch a cold.

For most emerging markets one key source of funds flow are remittances by their workers toiling in the developed economies. Turks have been guest workers in Germany from the late 1950s as are Filipinos in Hong Kong. Indians West Asia, Mexicans in the US or Somalis and Algerians in France. It is estimated that up to 100 crore persons could be considered “migrants” by 2050 and they can change the global power equations. True globalization implies the ability of people to work and stay anywhere without the constraints of visa/passport. Just like capital, that moves anywhere in the world by the mere click of the mouse, so should human beings.

In today’s context, the stress on FDI makes it an important component for investment in the economy. The need for FDI is explained as follows: The savings rate of the economy is around 30 per cent and if we have to grow at, say, an average of 10 per cent per annum and if incremental capital-output ratio is four then the required savings rate would be 40 per cent. So the 10 percentage point gap is to be filled by FDI, etc.

Such an argument assumes that in every sector of the economy the capital-output ratio is similar. Actually the service sector constitutes nearly 60 per cent of the economy and that is one area where innovation and efficient use of capital are most visible.

Experts are prone to using the capital-output ratio based on some manufacturing activities to estimate the general requirement. In the process we overestimate the need for capital.

Table 1 provides the concentration of FDI flows to developing countries. China absorbs more than one third of the FDI and India one-tenth that of China’s. Actually, the inflow into India is expected to rise, with some experts suggesting that it may touch $20 billion per annum. Table 2 provides the remittances across countries. India stands first in terms of remittances, constituting nearly one fifth of the global picture followed by countries such as Mexico and the Philippines. China has only 4 per cent of the global total and one-sixth of India’s remittances. In 2006, India’s cross-border remittances through formal channels were $27 billion, or slightly more than 3 per cent of GDP, and about one-eighth of global remittance flows. Remittances have many advantages. They are made by people from India to their relatives in this country whose sustenance is taken care of by the flows. They are less volatile than international fund flows as they are not looking just for short-term gains. The evidence is that private financial flows in the form of FDI /FII are more volatile compared to such receipts as grants and aid. The short-term flows are more volatile compared to the long-term ones.

Increasingly, private flows are playing an important role compared to government receipts. In the 1960s the government flows used to be an important part of developmental assistance for developing countries.

Remittances are less volatile and hence more preferred but less focused in terms of utilisation. India should focus on harnessing this flow as it is not volatile and shows a rising trend too. Of course, the government should facilitate swifter transfer of these funds to the far corners of the country at least cost. For this, the excellent postal system must be leveraged, by integrating it with global institutions for faster flow of remittances at low cost. More importantly, plans need to be formulated to channel these remittances into productive areas such as micro-credit. For that an existing financial institution can be converted into a channel organisation to enhance the returns from these remittances.

Simultaneously, India must plan for difficult situations on the emigrant front. Just like Uganda decided to expel all Indians, it is not inconceivable that large sections of Indians may be compelled to quit West Asian or European nations due to some emerging political or economic situation. Does the country have a Plan B in such a situation? All countries having significant working populations in politically sensitive zones such as West Asia must be prepared with a Plan B. It is not just taking care of the emigrant workers and bringing them back to India; it is also the issue of dealing with the domestic communities depending on the money-order economy for their livelihood. In that context having a financial institution dealing with forex generated by remittances may be more appropriate than leaving it to the judgment of million of individual households.

It is imperative that the country recognises the important role played by its workers, blue- and white-collared on foreign shores in providing the phenomenal amount of foreign exchange that is also stable and not volatile like FDI or FII.