Should finmin be run by FM or FIIs and foreign dalals?

It all started when a government proposal on multi-brand retail (aka Wal-Mart entry) was put on hold due to severe opposition from many political parties, including a major UPA coalition partner Trinamool Congress. There was a chorus of protest from the pink papers and metropolitan rootless wonders (MROWs), also called experts, regarding the government’s inability to carry forward reforms.

For most of these semi-literate economic experts, reform means allowing Wal-Mart into India. Wal-Mart and other global majors would have allocated huge sums of money to “educate” Indians about the benefits of such “reforms”. Even Enron allocated nearly Rs 60 crore to educate us.

The finance minister and the PM seem to give audiences to FII agents and FDI dalals at the drop of a hat. PTI

Then there was the simple issue of tax payments by companies using tax havens as a shield in asset transfers – also known as the famous Vodafone case. The finance ministry correctly felt that any asset transfer taking place in India requires to be taxed even though it may be done under the corporate veil of tax havens. The Indian business of Hutchison Whampoa was purchased using offshore tax havens by Vodafone registered at Cayman Islands. Now the government correctly felt that tax havens cannot be used to deny legitimate dues to the government since “India itself is not a tax haven” and levied tax on such transactions.

The matter went to the Supreme Court which, in its wisdom, held that Vodafone does not have to pay taxes on this transaction. Of course, the Supreme Court’s opinion that our tax laws will affect foreign direct investment (FDI) is something that surprised many a financial expert since government policies cannot be, and should not be, created to suit any particular class of investors.

There are many more such arrangements in queue and the sum involved in taxes can run in to several thousand crores. So the government amended its tax laws with retrospective effect – exactly what UK did earlier. The finance  ministry also brought in the General Anti-Avoidance Rules (GAAR) in the recent budget to prevent tax cheating by big business using tax havens as tax shelter. That created a huge furore with Indian business lobbies jumping into the fray.

Let us reiterate that tax havens are the red-light districts of global financial architecture. The big global accounting firms – which are also ultimately listed in tax havens – have been having a running battle with the finance ministry on this issue. A subtle form of blackmail has always been used to enable the use of tax havens to dodge Indian taxes – it is always claimed that global business will not be attracted to India, if we change our laws to make them pay tax.

The threat has been used ad nauseam in spite of the fact that FDI and foreign institutional investment (FII) constitute less than 10 percent of our investment rate.  Only in 2009-10 does the provisional number show FII and FDI inflows put together at nearly 15 percent of our domestic savings. The biggest chunk of our investment is financed by our own domestic savings and in that household savings is the dominant component. In other words, the average Indian housewife is responsible for financing our growth and not the FII or FDI or even our corporates. See table below: 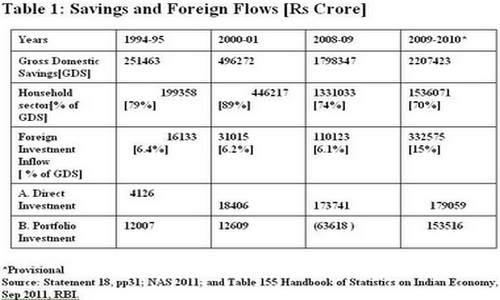 Last week, a group of US business interests gave a memorandum to President Obama stating that there is a “vacuum” in decision-making in Delhi since the regional parties are having a larger say about policy matters. This is atrocious and a direct interference in our polity. Do they mean that it is easier to bribe and do business with a central authority but not with several states? What do they mean by “vacuum”? Our docile media did not question this. Then the new chief of the Confederation of Indian Industry (CII) criticised the government on the same issue. It is important to know if the CII represents the interests of US/Europe business groups or that of India?

The finance minister, a reported by BusinessLine, has to come up with an explanation that goes as follows: “Mr Pranab Mukherjee has reaffirmed that tax changes related with the General Anti-Avoidance Rules (GAAR) proposed in the budget are not substantive but clarificatory in nature. These changes reiterated only the intent of the legislation….Mr Mukherjee (also) informed (a meeting of business leaders) that tax cases which have already been assessed and finalised up to 1 April 2012 cannot be reopened….Further the Indian tax laws are very clear that companies making capital gains from the assets located in India will have to pay taxes either in the country of their origin or in India. It is not a case of double taxation but ensuring that companies that are liable to pay tax must pay some tax.”

Now, why should a finance minister do this? In addition to that, the most damaging news item to be published suggests that US Treasury Secretary Tim Geithner is looking in to our tax provisions. Never before in history have specific proposals of the finance ministry been examined by the US treasury and perhaps vetted.

The most important point is that the $11 billion Vodafone deal was signed in the Cayman Islands. Similar retrospective amendments were made in the UK last month and the same Vodafone was made to pay tax there. So if it comes to UK or US laws global business keeps its tail between its legs and sits mum, but when it comes to India bullying and blackmailing is the norm. It is a great shame on us that we are treated like a Cactus Republic (Banana is a favourite fruit of Lord Ganesha and so I do not want to use that name).

In the case of FIIs, as excellently explained by Jaithirth Rao, the Indo-Mauritius treaty was started to encourage Indian businesses to invest in Mauritius. But clever lawyers and accountants understood the fine print that companies from Mauritius investing in India needed to pay no taxes on income generated in India and from then on our fiscal regime, the domestic economy and, possibly, even our politics, has been distorted. The so-called “post-box” companies made many wealthy and powerful desi investors “round trip” their overseas funds in to India.

In the case of FDI, an interesting study by KS Chalapathi Rao and Biswajith Dhar of ISID,  New Delhi, in 2011 suggests that “it is quite relevant to note that round‐tripping related investments increased gradually during the period from just a little less than 2 percent in 2004 to 21 percent in 2009. In the case of India, while it is typical of the FDI inflows to enter via tax havens, this route is exploited the most by private equity/venture capital/hedge funds and round‐tripping variety of inflows. This is more so by PE/VC/HFs promoted by Indians.”

Not only that, Somasekar Sundaresan argues  that FDI, too, can bring NGO-type activism, as seen in the activism surrounding Coal India.

Given the small role that foreign money plays in our domestic investment, one finds that the role of the FII is more seen in share market fluctuations that are unrelated to our domestic economy. FIIs may have around 20 percent of the turnover but have a larger impact on prices due to herd behaviour. If Japanese interest rates become attractive, they will relocate funds there and it has got nothing to do with our economy.

It is interesting that the larger, and more important, flows in the form of remittances are not much discussed. It was as high as $60 billion last year. This is the unsung and unheard activities of Indian fitters/plumbers/carpenters and masons (among others) working in West Asia. Their remittances are as big as, or even bigger than, our software exports.

But the finance minister and the PM seem to give audiences to FII agents and FDI dalals at the drop of a hat. They seem to have met relevant ministers/bureaucrats at least a dozen times in the last one month. But who listens even for a moment to the average Indian housewife whose savings is the primary cause of our economic growth, or to the plumber from Kerala, struggling in shanty camps in West Asia, whose remittances sustain us.

← Unlisted family businesses rule India
Should finmin be run by FM or FIIs and foreign dalals? →